The 14.5x114mm cartridge proved to be very effective in an anti-materiel role in modern warfare. Ukrainian companies have designed multiple anti-materiel rifles chambered in this cartridge within the past several years. In fact, the 14.5mm Snipex T-Rex and Alligator rifles have been recently adopted by the Ukrainian army and their semi-auto sibling, Snipex Monomakh, is being tested by the government. Another Ukrainian company that is extensively exploring the capabilities of this cartridge is the Mayak Plant. Earlier, we took a look at Mayak Plant’s Horizon’s Lord anti-materiel rifle and their new 12.7x114HL cartridge created by necking down the 14.5×114 to .50 caliber. Today, we’ll talk about another Mayak Plant design, the PG-14.5 Night Predator (ПГ-14,5 Нічний Хижак), an anti-materiel rifle chambered in 14.5x114mm.

PG-14.5 Night Predator has been in development since 2015 and has seen combat use since then despite not being officially adopted. Although it is technically an anti-materiel rifle, the company calls it infantry cannon – that’s literally what PG stands for in the model name (ПГ – Піхотна Гармата). The reason for calling it infantry cannon is that it’s quite a large crew-served weapon and it is part of a family of weapons that is in development which will include similar guns chambered in 23x152mmB and 30x165mm autocannon cartridges. The PG-14.5 Night Predator is based on a barrel borrowed from the KPVT 14.5mm machine gun. Reportedly, earlier prototypes might have used barrels from the 14.5mm 2X35 Inserted Unified Self-loading Gun which is a training sub-caliber barrel insert for artillery and tank cannons.

PG-14.5 Night Predator is a single-shot rifle with a removable breech block/bolt and a rotary lockup of the action. The rate of fire is 6 rounds per minute. The company claims that this weapon system has an effective range of up to 4000 meters with 1 MOA accuracy. The gun is used with standard machine gun ammunition (“B-32” API, “MDZ” HEI), however, new HEI and tungsten carbide penetrator projectiles are in development as well. Besides its main targets (lightly armored vehicles, APCs, IFVs), the rifle is also used against fortification, for providing covering/suppressing fire for infantry maneuvers, and is even advertised to be effective against tanks for destroying exposed aiming/navigation devices and damaging vulnerable parts such as tracks. 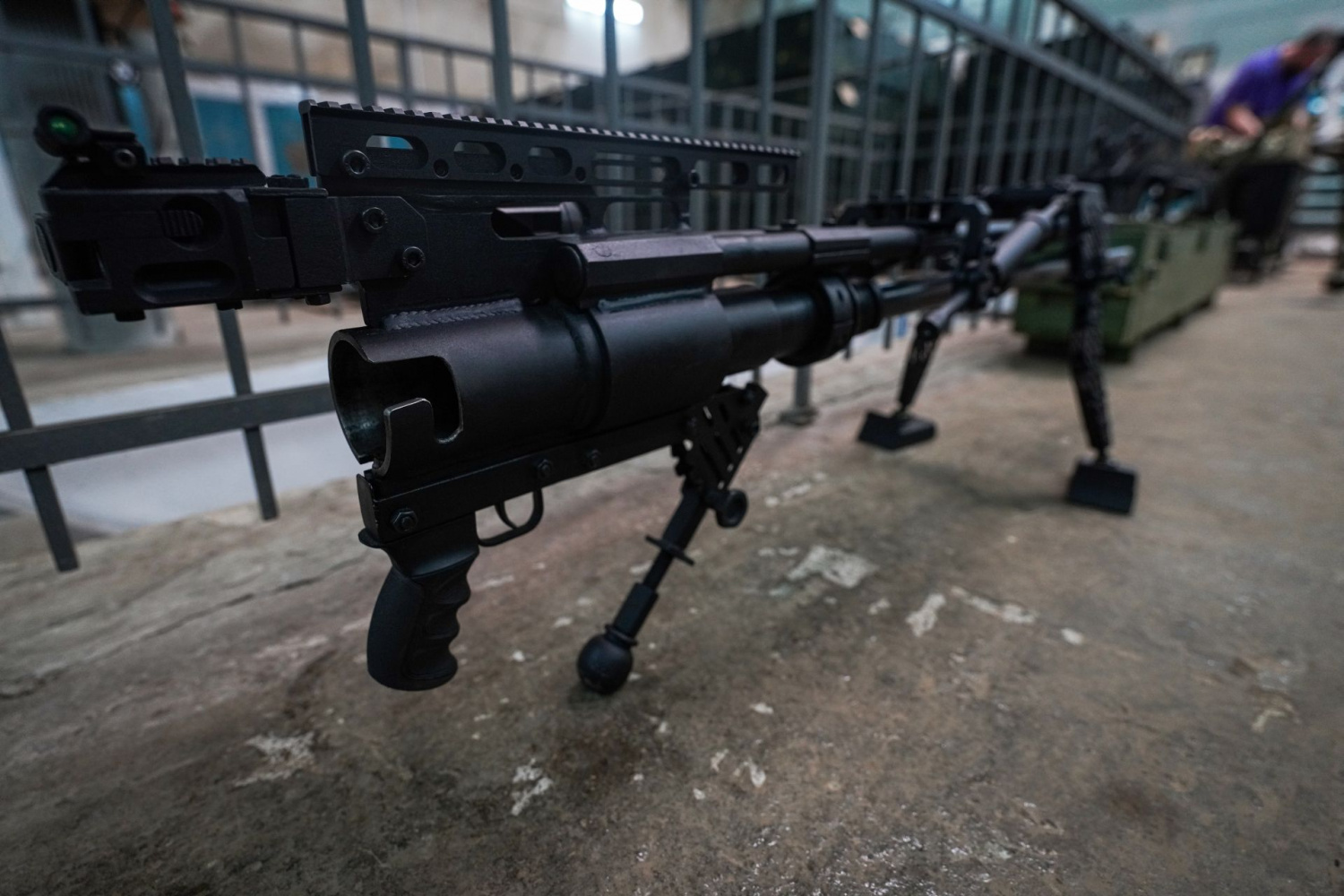 The PG-14.5 Night Predator rifle features a large bipod mounted to the chassis above the barrel, with a shock absorber attached to each leg. Additionally, there is a monopod in front of the trigger guard area. The folding stock looks to be AR-15 compatible. There is a Picatinny rail section over the breech area and as noted by the company, despite the powerful cartridge, a wide variety of scopes can be used with this rifle as the optics are not exposed to excessively high stresses thanks to the highly effective recoil mitigation system of the gun. The barrel length of the rifle is 1350mm (53″) and the overall length with the suppressor attached is 2470mm (97.25″). The suppressor is removed during transportation decreasing the length of the weapon to 1700mm (67″), which, as mentioned by the company officials, allows to discreetly transport it in pretty much any vehicle. The overall weight of the rifle is 32.96 kilograms (72.75 lbs). 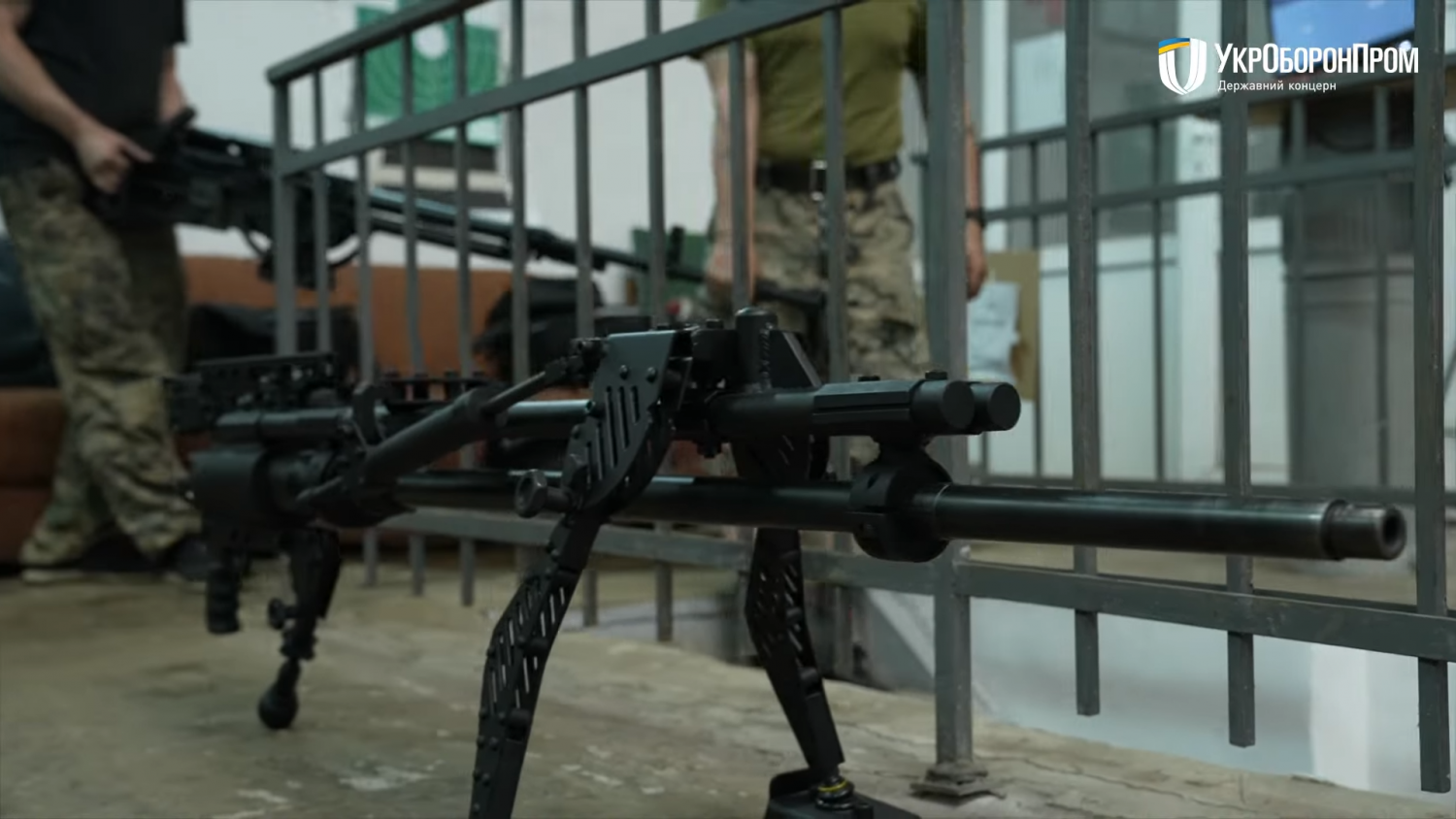 The suppressor, which the company calls a ballistic cooler, is an important part of the system. They claim that this muzzle device not only reduces the report of the rifle but also significantly decreases its heat signature and provides a smooth transition of the projectile from the bore to the atmosphere which contributes to the accuracy of the weapon. Oleksandr Gordeev, the chief engineer of Mayak Plant, notes that at 700 meters the report can’t be heard and at 800 meters the rifle can’t be seen in thermal devices (not specified what type of devices).

It is unknown whether the adoption of Snipex’s guns has completely fulfilled the demand of the Ukrainian military for a 14.5mm AMR and will result in PG-14.5 Night Predator not being adopted (at least on large scales) or if both weapons will be deployed side by side. At any rate, Mayak Plant is also actively marketing this weapon system to foreign customers. PG-14.5 Night Predator has been recently shown to a delegation from an African country. Also, a team of Mayak Plant engineers has just returned from an undisclosed country in Arabian Peninsula where they demonstrated the weapon’s capabilities to potential Middle Eastern customers. In fact, they brought a version of the rifle called PG-14.5 Desert Snake which is adapted to the climate of the Middle East. 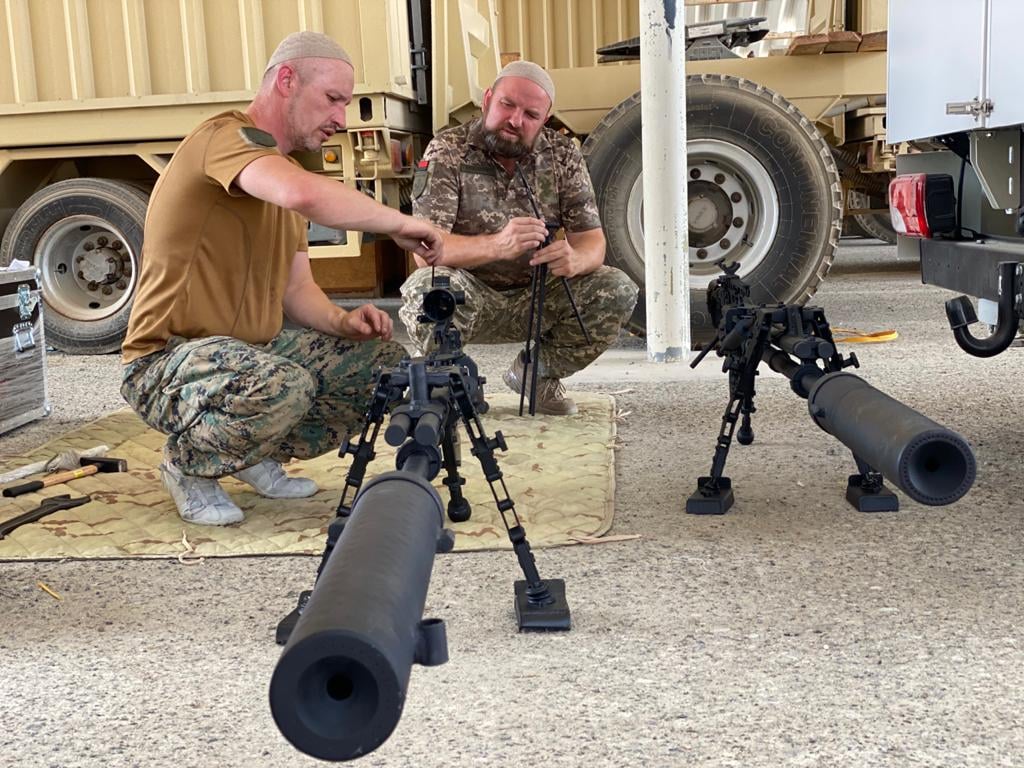 We’ll make sure to report any significant news about the further development, modifications and adoption of the PG-14.5 Night Predator rifle. Stay tuned!