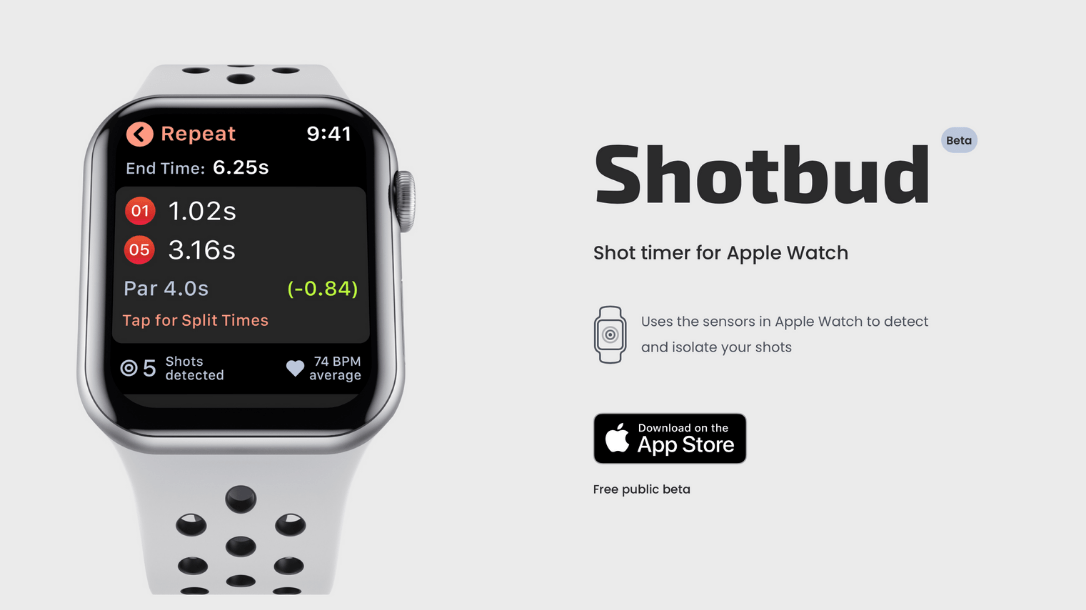 Raise your hand if this has happened to you. You pull up at the range, get your targets set up, get your gear on, and then go into your bag to grab your shot timer. As you frantically rip through your bag, you realize it’s not there. You forgot one of the most critical pieces of training equipment. Now your plans for a structured, data driven training session are out the window. But then you remember you’re wearing an Apple Watch, and you have the SHOTBud Timer App.

What is the SHOTBud Timer App?

Well, like the image says, it’s a shot timer app for your Apple Watch. I discovered it entirely on accident. I was at the range and forgot my timer, and needed something. Shot timers are an incredibly useful tool for providing feedback on your shooting skills. Without one, it’s difficult to train performance shooting skills. I went to the App Store and searched for “shot timer” and the SHOTBud app popped up. I downloaded it, read the instructions, and was off to the races.

The Technology Behind the App

Unlike previous iPhone timer apps, the SHOTBud doesn’t rely exclusively on the microphone. This is good, because those previous apps didn’t work very well. They were best used for dry fire training with the par time. SHOTBud on the other hand uses a combination of inputs to detect live fire. It does use the microphone. However, it also uses the Apple Watch’s onboard accelerometer to help detect your shots. It’s sensitive enough to pick up shots from a 32 ACP Beretta Tomcat.

The SHOTBud App has four built in presets that are currently live. It has live fire (outdoor), dry fire, CO2 assisted dry fire, and airsoft. Lacking airsoft and CO2 guns, I haven’t experimented with those modes. However I’ve used both dry fire and live fire. You can quickly adjust from one setting to another as well.

The interface on the app is pretty easy to use. For live and dry fire I use the delay function, which allows me time after I press start to get set for whatever string of fire I’m working on. Once your delay is set, hit start. Your Apple Watch will vibrate as your start signal. I have to tell you, that took a little getting used to. When you’ve spent 15 years waiting for a shot timer to beep, a haptic start signal on your wrist is a little…surprising. In dry fire mode it vibrates again when your par time is over, if you set one. It does vibrate in live fire mode as well when your par time is over, but it’s hard to notice if you’re actually shooting.

T​he only wonky thing about using it for live fire is that when you’re done shooting, you have to hit “stop” on your watch to get the app to stop recording your shots. It’s a little weird but you get used to it.

Yes, it works well enough. I like it, because I’m usually wearing my Apple Watch, but I’m not going to get rid of my CED7000 because I have it. Let’s take a look at the good and bad of the SHOTBud App.

Good: It Reliably Picks up the Last Shot of a String

This is probably the most important thing a timer needs to do. If you’re training something like failure drills, you need to know when your last shot was. SHOTBud does that pretty well. It works best if you wear the watch on your firing hand. That being said, I wear it on my support hand a lot and still get results.

If you’re concerned about your split time; aka the time between shots, it’s not great at that. I’ll routinely see one shot that should have been a 0.24 split counted as two shots with 0.12 splits or something similar. This is a common problem with app based timers, because the microphone in your Apple Watch or iPhone 12 is much more sensitive than the mic in a shot timer.

T​here are number of shot timer apps available on the app store for iPhones. I don’t know anything about apps available for Androids because I’ve never owned an Android. I can say that all the apps in the App store except for SHOTBud are almost completely useless. They’re fine for dry fire, but they’re either too sensitive or not sensitive enough. In fact, the new iPhones from 11 on have a noise deadening feature built into them that makes these apps even more useless.

You could say that the Double Alpha Academy Shotmaxx 2 is a competitor to SHOTBud. The Shotmaxx 2 is a shot timer watch. But unlike SHOTBud, the Shotmaxx 2 is a timer first, and a watch second. It’s also not a very good watch, it’s impossible to find, hideously ugly, and costs $150. If you want a timer get a CED7000.

The Verdict on the SHOTBud App

If you’re in the Apple ecosystem like me (I’m typing this on a Mac, my Apple Watch is on the charger and I have two iPhones in front of me), I’d actually recommend downloading SHOTBud. Here’s the thing. Like I said above, it’s never going to replace my traditional shot timer. However, the price for SHOTBud is perfect, since it’s free. For a free timer that’s in open beta, it’s absolutely fantastic. It will definitely get you through those range sessions where you realize that you forgot your real timer, but still want to do some training. If you recognize the limitations of the technology, and use it for what it is, the SHOTBud Timer App is actually pretty great.

← Prev: MCA-22 Rimfire Chassis From Luth-AR Now Available Next: Different Types of Gun Safes and Why You Need Them →

Is the Magpul/Maztech X4 System the coolest Magpul product announcement since the waffle maker that they never made?...